The Folklore Library and Archive 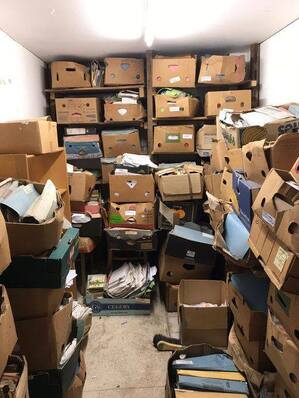 Mark writes: In November 2020 there was an appeal on social media to rehouse the history, mythology and folklore archives of Chris Jenkins - a massive collection amassed over many years. This is the photo that accompanied that post.

Over the years, the accumulated knowledge of many folklore collectors has been lost because there were no instructions left. For example, the entire archive of Barbara Spooner, a folklore collector from Cornwall, was lost because she lived alone in council accommodation. When she passed away, the whole lot was put in a skip. I could not run the risk of that happening here, when at first sight it appeared that there was a lot of work here.

And so, I got in contact with Debbie, the lady who had put out the original appeal, and plans were made for the archive to be retrieved. One damp weekend in December, myself and a kindly neighbour went off to Totnes, in South Devon, where the collection was stored, to bring it back. Between us and our two cars we managed to get half of it on the Saturday. A further trip on the Sunday morning just managed to secure the rest.

Sorting this archive into some form of accessible catalogued order is going to be a vast undertaking. Chris was obviously a passionate collector and there is a lot of paper in the collection to go through. Each box is stuffed full of foolscap folders, and there are more than 50 boxes to go through. There are complications however. The collection was housed in a rather damp facility for some time, and it appears that aside from Chris, some mice were also quite keen to access some of the boxes. As a result, parts of this collection are in quite poor condition. The decision has therefore been taken to digitise most of this collection (which is predominantly hand annotated prints and photocopies), with handwritten notes and other items of particular interest being conserved where possible.

We are making the index for this archive available online as a working document. It will continue to be added to, so please check for the latest version if looking at the holdings. Current archive index revision date: 17 May 2021.
CLICK HERE TO ACCESS THE ARCHIVE INDEX
To request copies of items from the Chris Jenkins Archive, please contact us using this form 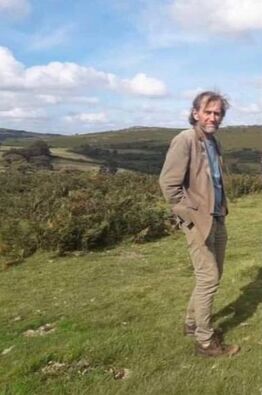 Chris Jenkins grew up in Shropshire, where later in life he ran an Earth Mysteries group. Ian Popple recalls that he and his partner Sue used to visit an ancient site with Chris every Sunday for many years. Another informant, Jake Ewins, used to regularly visit places of interest on Dartmoor with Chris, who had a hand-annotated map of all the interesting sites which he used to keep in his car. (Whether the map is in the archive or is now lost remains to be seen).

Although Chris never married, he had a partner called Sharron with whom he had a son, Arron. Although they were not geographically close, they kept in regular contact by text and email.

Chris moved from Shopshire to the Devon town of Totnes, which he loved. He said there was an energy about both the town and the people who lived there. Chris slept most nights in a yurt which was constructed from trellises and a large piece of waterproof material, all of which had been found or donated. This was located in the garden of a large house belonging to Angela Taylor. Previously to this Chris had spent many years living sleeping in his car. These were personal life choices rather than being brought about by financial considerations.

Most of Chris' research was undertaken at a workshop in the town, where he loved to draw out maps. He later relocated to a building known as 'The Ark' where he built storage for his archive (as can be seen in the photo above).

Chris was commonly known as 'Chief', apparently because of his bringing people together. In later years he worked at Hermes, where he was fondly remembered.

In 2020 Chris had a car accident and suffered a head injury. He visited hospital and returned home, where he died the following day. It was suspected that he suffered a stroke.